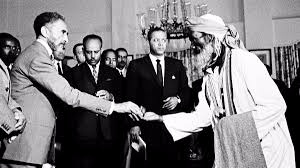 This picture captures the attitude towards Rastafarian in Jamaica. You can see how embarrassed the Jamaican officials were when this Rasta man greeted the Emperor.

During this time, Selassie pointedly refused calls to demand that the Rastafari renounce their faith in Haile Selassie's divinity, and some 2,000 Rastas accordingly received Orthodox baptisms.

Stories About Jamaican Culture and Customs

For most of my young life, I was a churchgoer. I went to the East Queen Street Baptist Church almost every Sunday. I sang in the church choir and went to Sunday School. Despite all these activities, I was not very religious. I was a timid adolescent who did not question his elders. So, when my guardian said, "Go to church on Sundays," I did. However, I  was doing it more out of compliance than commitment. As a teenager, I was confirmed as an Anglican with no more adherence to any religious doctrine than I had earlier in life. Many of my friends had similar attitudes. Going to church was a social activity for many people I knew and me. It was a place where I met with my friends, had a chance to wear my Sunday best, and participated in services but not a place where I questioned my core beliefs.

However, there was a group of men in Jamaica during the '50s that, from my perspective, took religion much more seriously. These men gathered on street corners and in parks to share their beliefs with anyone willing to listen. They believed that a small black man in Africa was the living God. The average Jamaican thought this notion was crazy and warned their children to stay away from these lazy, uneducated madmen because all they did was grow their hair long, smoke ganja, and talk nonsense all day. I was young and fearful and did not want to do anything too far from the norm, so I kept my distance from these wild-looking men.

But, many of the young and the poor were very attracted to this group of men because they claimed that God was black and that there was a promised land for all of us to return to in Ethiopia. Going back to Africa was an attractive theme because one of Jamaica's heroes, Marcus Garvey, introduced the idea during the 1930s. However, most Christian churchgoers looked down on the growing movement called Rastafarianism. These men were Rastafarians who had taken their name from Ras Tafari, the pre-legal title of Haile Selassie I, Emperor of Ethiopia. The movement believed that Haile Selassie was another incarnation of the Christian God, called Jah, and they had the evidence to prove it. Later, Bob Marley became one of the best-known Rastafarians in the world, and the lyrics from many of his reggae songs carried the Rastafarian message to the world.

I was around seventeen when I heard the building excitement that God was coming to Kingston that year. To the average Jamaican and me, the Emperor of Ethiopia was visiting Jamaica, and we hoped he would squelch the nonsense these Rastafarian were preaching. To the average Rastaman, God was coming to Jamaica, and he would validate their claim that he was God. Thursday, April 21st,1966, was the day of reckoning. On bicycles, cars, and trucks, Rastafarians descended on Palisadoes Airport in Kingston to meet their God, Emperor Haile Selassie of Ethiopia. The Rastas called the day Groundation (or Grounation) Day was about Selassie's s refusal to walk on the red carpet provided for him but made his first contact with Jamaican soil.

Some 100,000 Rastafari from all over Jamaica descended on Palisadoes Airport in Kingston. Many Rastas who were in the closet came out on Grounation day. As I watched the proceedings from my fence on Victoria Ave in the center of Kingston, I was mesmerized by the comings and goings. God was on his way and would arrive on an Ethiopian Airline. The Rastas waited at the airport playing drums and smoking large quantities of ganja. This thought freaked out my seventeen-year-old mind. Why did God need a plane? Why didn't he appear? This detail did not dampen the Rastafari enthusiasm as they smoked Spliffs and Chalices as the brethren waited in the pouring rain to greet their Messiah. Thousands more lined the main route from the airport to Kingston, weaving flags, hoping to catch a glimpse of the African God.

Just as the sun broke through the clouds, the imperial jet came into view bearing the Ethiopian colors and a roaring lion on its side. The crowd erupted. The day of deliverance had finally come. Legend has it that the sun showed for the first time that day as his plane came to land. The excited crowd broke down the barriers and rushed the tarmac, causing Selassie to retreat to the safety of his aircraft. Finally, Jamaican authorities were obliged to request Ras Plano, a well-known Rasta leader, to climb the steps, enter the plane, and negotiate the Emperor's descent. When Plano reemerged, he announced to the crowd: "The Emperor has instructed me to tell you to be calm. Step back and let the Emperor enter our country." Grounation Day, in many ways, legitimized the Rastafarian movement. Rumour has it that Rita Marley converted to Rastafarianism on this day, and after Selassie had left the country, the movement became a worldwide phenomenon.

you introduced Marley to me and I still love
him. Today the two of us heard Manfred´s nice x-mas song. Did not know him either.

Hmm. Did you live in Stony Point? Did you work for IBM?

Great perspective Sundarii. Are you saying that you would stay home? Wouldn't you be curious to see God in the flesh?

Hey Baron, Always nice to hear your perspectives. If someone told me God was coming to my neighborhood, I'd take it as I do when they say the end of the world is coming SOON! I'm a Buddhist, not worry

What an experience. I wish I could have experienced Jah for real.