TWO DAYS WITH MY SON, MADISON, IN ZURICH

LST is the name my son Madison called himself when he decided to become a DJ and a Rapper. LST stands for Light-Skinned Trouble, even though Trouble is not a thought I have when I see Madison. Last Thursday, July 11th, was Madison's 31st birthday. Since he would be performing as a DJ with the rapper Amine at a music festival in a small town just outside of Zurich, I decided to travel to Zurich to celebrate Madison's birthday with him. My trip was rewarding, pleasurable, and informative. I had a chance to see Madison perform. Experience the excitement of a European music festival, and meet Amine and the beautiful people supporting the group when they are on tour.

Madison and his brother Justin

I was out of my house at 5:45 am to catch a 7:11 am train from Avignon, about a forty-five minutes car ride from Apt. I arrived at the station just before acquiring the TGV to Lyon. I changed trains in Lyon for a train to Genève, and another change put me on a train to Zurich. I love traveling on European trains as they move through the lush green countryside. I went to second classes, and at one point, French children backpacking around Europe for ten days surrounded me on the train. I had a chance to ask them a few questions and get a glimpse into the lives of European teenagers during the summer. I live for these moments when I can mingle and chat anonymously with young people in unfamiliar places. Finally, I arrived at Zurich HB station. I had some time to kill because Madison was flying in from Lake Como in Italy and was still two hours away. So, I found a lounge bar, bought an eight-dollar bottle of water with gas so that I could use their internet, and waited for Madison to arrive in Zurich.

Once Madison texted me to let me know that he had landed, I took off on a thirty-minute walk, which took about an hour, to find his hotel. I wandered along Josefstrasse through beautiful Swiss neighborhoods where it seemed like everyone rode bicycles. Men, women, and children would zip by me in every direction. As I walked, I enjoyed the cool summer breeze, contrasting with Apt, which was very hot this summer. As I rounded the corner to the Reinesansse Zurich Tower Hotel, Madison was waiting there with a concerned look. He worried I had gotten lost as I tried to find the hotel on foot. I settled into Madison's room on the twelfth floor and, after around thirty minutes, went to the lobby to meet the group for dinner. I had completed Amine, his tour manager, Bouba, his assistant, Gabriella, and his bodyguard, Henchy, earlier in the Spring when I attended a concert at Stony Brook University on Long Island. So, this was an opportunity to renew my friendship with the group. After a few minutes of warm greetings, we walked together to a Soul Food restaurant in Zurich to have dinner and a lively conversation.

Thursday was Madison's birthday and the first day of the music festival outside of Zurich. A couple of Mercedez Benz vans showed up around 2 pm to take us about an hour's drive to the festival. When we arrived, I was in awe of the massive collection of tents and temporary buildings put together like a city with four massive stages. I was even more surprised by the number of young people streaming from every direction. After a brief security check and being given armbands, we went backstage lounge area with a well-stocked bar, good food, and private rooms. After settling in, Madison and I went to find the stage to set for Amine's performance at the show. As Madison set up for the show, I could hear music from another sound stage and a small crowd of kids cheering. He checked sound, lights, microphones, and background communication. We were ready to go. The young people started to move towards our stage, and before long, they packed in as far as my eyes could see.

Madison started to play the music, and the rocking began. The kids were jumping and singing along with songs. I stood off stage in the wings, watching this wild scene develop. There were at least five thousand young people going wild with every Rap song that madison played. After ten minutes, Amine jumped from the shadows onto the center of the large stage and went even louder and more expressive. Amine's every move for the next half hour was a catalyst for more wild jumping and hand waving. A large group of boys in the center of the crowd created a vast circle. Their friends would do cartwheels and other athletic movements after running into the center of the ring. These activities reminded me of what kids on the TV show Soul Train would do some forty years ago. Toward the end of the show, Amine quieted the crowd, told them that it was Madison's birthday, and requested that they sing happy birthday to Madison. After One, Two, and Three, the massive group of young people sang Happy Birthday to Madison. Gabriella, Amine's assistant, brought a cake on stage with a few candles. Madison blew out the candles, and Amine shared the cake with some kids in the first row. I went on stage with Madison, and Amine told the audience I was Madison's dad. The whole experience was epic!!

Below you will find a music video by Amine. Madison is in the video.   Amene has many other videos. Check them out. They are a lot of fun. 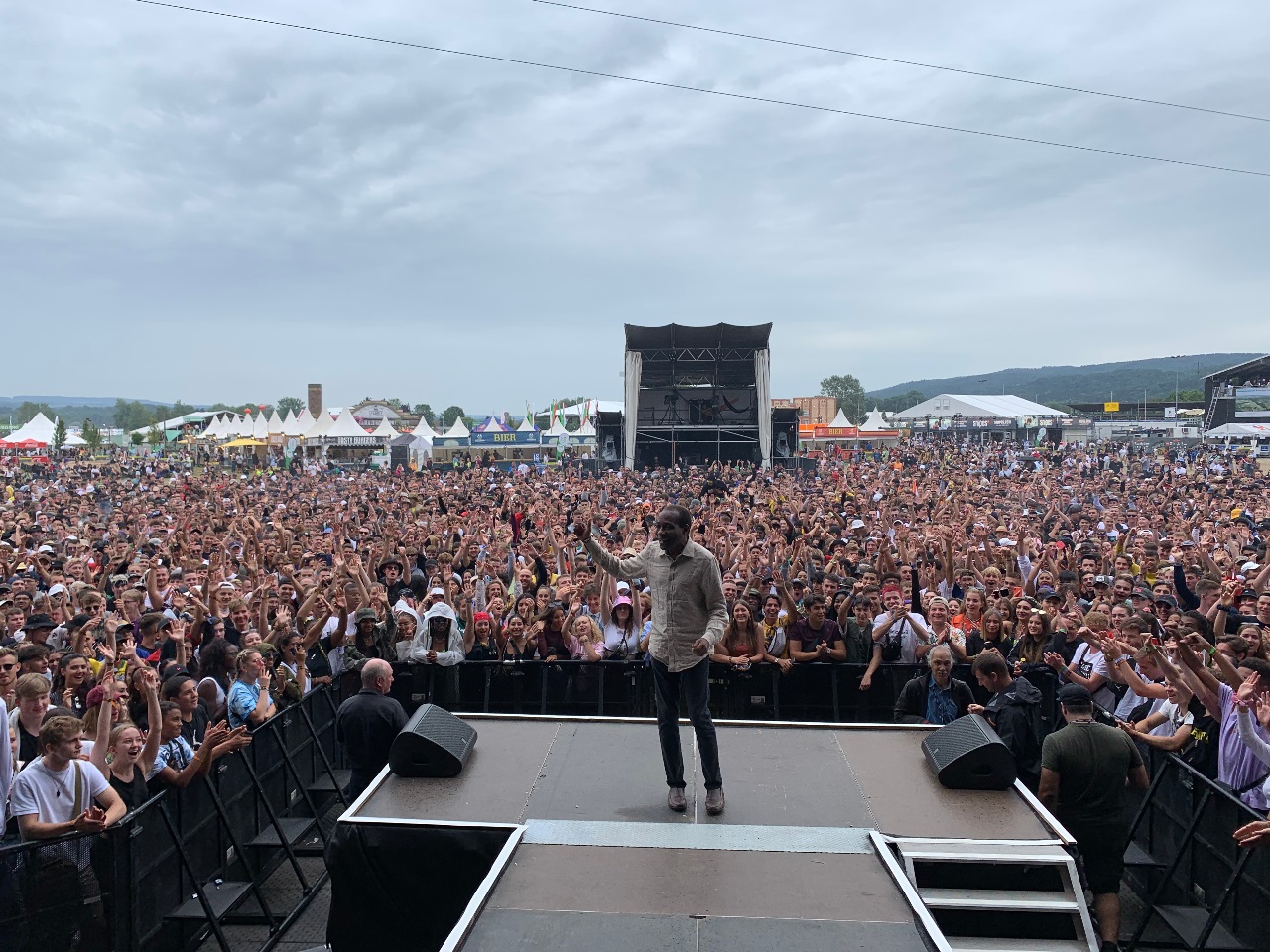 Here I am on stage just before the start of the concert. There were so many kids and they would cheer for the smallest activity. I wanted to do a little dance but I was not sure if it was appropriate.

Wow Baron, Madison hits the Big Time, (and on his Bday, too!). What a fab experience for all of you! So happy for you guys. Love, S

Thank you Sundarii. It was definitely a super experience. He is off again. He is in Jakarta as we speak. How are you? I have not heard from you lately.

What an amazing experience for both you and Madison. So glad you guys were together for his 31st birthday. Hard to believe that our kids are adults in full bloom!! Proud of him and so happy for you.

You are right, H. We could not have predicted how they all turn out. We just have to love them and leave the rest to nature.

What a wonderful experience for you Baron. Thanks for writing about it and sharing it. I enjoyed reading it.

Hello Delores, How is the summer treating you? Yes. It was a great experience. The entire crowd sand Happy Birthday to Madison.

This is wonderful, Baron. Thank you for sharing it.

How are you Leslie? Thanks for reading my post. There are more stories on the Blog. Keep reading.